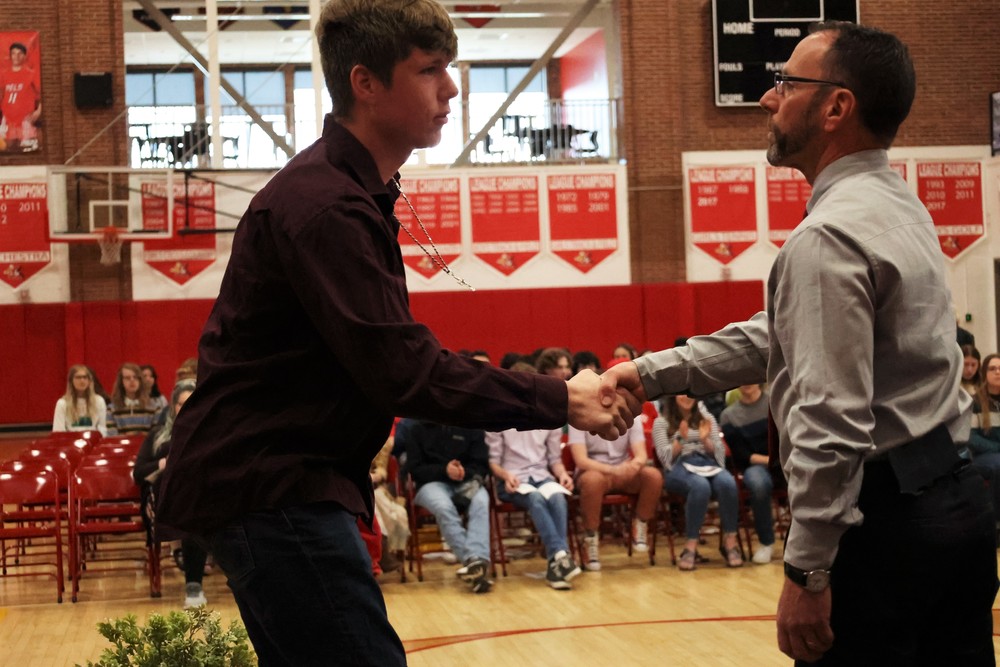 “I cannot promise anything in your future but your grade point average indicates you are having academic success, which often leads to a more promising future,” Swan said.

A total of 133 Klamath Union students were recognized Thursday for the school’s Academic Achievement Awards.

The night also recognized 18 new students into the National Honor Society, expanding the number of KU students in the society to 74.

Each Klamath Union student in attendance for the ceremony earned a 3.25 GPA or better for three consecutive academic quarters for classes they have taken at the high school.

Swan started the evening with an encouraging message to his students, acknowledging the hard work each of them have done this year and throughout their years as Pelicans. To his left was Vice Principal Jacqueline Brandow and school counselors Rebecca Pierce and Jennifer Spicher ready to hand out certificates to students.

Swan echoed the ample research which has been done by administrators at Klamath Falls City Schools and throughout the state of Oregon, trying to understand a student’s failure to progress in secondary schools, high school, college and the effort being done to gather graduation completion rates.

Swan’s brief message boasted and described each of the 133 students seated right in front of him in the middle of Pel Court.

“The following KU Pelicans here are clearly doing something right. They are engaged, focused, prepared, organized … they are open-minded, self-challenged, positive self-starters, opened to feedback and challenge themselves to grow,” Swan said. “They know what their instructors want and deliver by the days and standards that are presented to them.”

Swan spoke about the students’ ambitions and made sure to credit their learning, social skills.

“The students here are inquisitive, creating and evolving life vision … they set goals, having learner ownership and laying out plans to move forward. They take risk, managing time and frustration,” Swan said. “They are team players, collaborate, serve and communicate, seek diversity and take care of themselves. Your academic performance demonstrates you are above average.”

Once Swan finished speaking, students came up on stage to receive their certificate as their teachers, on their left and right sides, applauded and looked on.

Going above and beyond

Sophomore Logan Renfro and classmate Ashlee Georgia had much to smile about after the ceremony.

Renfro is a three-sport athlete who has ambitions of earning the highest honor he can receive once he graduates in two years. This year, Renfro has been juggling his academics with football, wrestling and track and field.

“I have been working really hard. I am trying to be valedictorian, so I think it just means that I really pushed myself and have come along way,” Renfro said.

Renfro has been creative in the ways he gets his school work finished.

“It is really hard, a lot of paying attention. I always try to get my work done on time. They (KU teachers) give you enough time in class to get your work done. If you could get it done in class, that is probably the best. I try to delegate my time wisely,” Renfro said. “It is always just about taking the extra step, going the extra mile to get your stuff done.”

Georgia also advocates finishing school work during classes. When she is not babysitting, Georgia spends her free time finding new places where she can volunteer. She has helped at the Klamath Animal Shelter and at Integral Youth Services.

“I did a little program over the summer reading with kids, just volunteering anywhere I could find,” Georgia said. “I am excited to start a new journey, like a new experience. I want to see new things and try new things.”

Note: Look for an article on the National Honor Society Monday at https://www.kfalls.k12.or.us/